Nesto Speakers Celebrate the Intersection of Art and Science 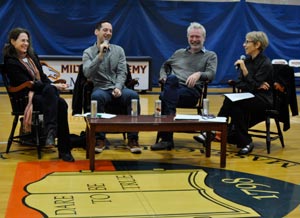 Ms. Wheeler visited Milton as part of Catalyst Conversations with artist Deborah Davidson, technologist Eric Gunther, and scientist Andrew Berry. Catalyst Conversations, which Ms. Davidson founded, explores a dialogue between art and science. As the world becomes increasingly technology oriented and visual, the connection between art and science has grown, evident in artistic demonstrations of scientific concepts and in the use of science and technology in art.

Artists and scientists both benefit from collaboration to build on ideas, Mr. Berry explained. He said that Charles Darwin’s voyage to the Galapagos Islands did not involve a “eureka moment,” contrary to lore—that his theories took shape after he consulted with a scientist in London. “He failed at his initial venture, but he was still open and still seeking,” Mr. Berry said. “Often, success comes in bringing in other people. The creative process of making art is much like the creative process of working in science.”

Mr. Gunther co-founded the art and technology studio Sosolimited, which uses data and technology to create art. The studio recently created a large-scale kinetic sculpture that mimics the movements of a flock of birds. They also collaborated on creating lighting for the Empire State Building that reflected fan activity on social media. Collaboration can be difficult, he said, describing the challenges that emerged while directing a video for the band OK Go.

“We created a concept, and they liked it, but they wanted to do it in a single shot. We initially thought we couldn’t, and they pushed back,” Mr. Gunther said. “There were some uncomfortable moments, but we worked together, and the piece turned out better for it.”

The speakers encouraged students to pursue ideas for the sake of exploration and play. Ms. Wheeler described a recent project in which she explored the movement of objects underneath the water of Walden Pond in Concord, Massachusetts. It wasn’t until she returned to her studio and viewed her photos that she discovered what couldn’t be seen with the naked eye.

“Sometimes it would be magic, and sometimes it would be nothing,” she said. “You can chase the nothings until they turn into something.” Ms. Davidson added, “Allow yourself to suspend disbelief and try to operate in that territory. Discomfort is a really productive place for creative people.”