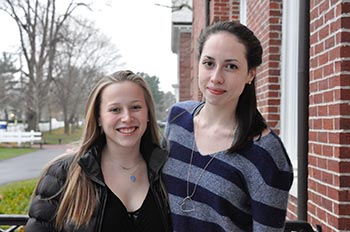 “You get nothing out of being cruel to yourself, and you gain everything by being kind,” Ginny Barrett (II) says. “It’s a really hard lesson to learn, but once you’re there, it can be transformative. It starts as simply as looking in the mirror and saying, ‘I look good today.’”

This is the message that Ginny and Laura Bailey (I) hope members take away from the student club, Body+, which they cofounded this year: Self-confidence comes from accepting and loving the person you are today. The girls are not just close friends; they’re cousins, and from this lifelong bond they’ve guided each other through the various insecurities that arise in adolescence.

Ginny struggled with her confidence in middle school, and found it hard to discuss with others. She felt invalidated when people responded to her concerns with, “Stop it, you’re beautiful.”

“Obviously, when people do that, they’re trying to give you a good message and make you feel better, but they’re not really listening,” Ginny says. “Body image comes from so many outside factors pushing on you, whether it’s society, media, family or friends, which makes it harder to talk about, because you never know whether a response is going to boost you up or push you down. I wanted to create a safe environment for people to share their experiences and really listen to others, and realize they’re not alone.”

Each meeting has a focus or activity—like the body-positive photo shoot they held with the help of a photography student—that encourages members to love the body they have. At the end of each meeting, members give the person next to them a compliment, but also compliment themselves.

It’s ingrained in people to self-criticize, finding fault with everything from their weight to their complexion, from their hair type to their nose shape, Ginny and Laura said. The club is open to students of all genders.

“We don’t want to just talk about spreading body positivity to others,” Laura says. “There’s a stigma, especially with girls, against being ‘full of yourself.’ We’re not supposed to agree with compliments, we’re supposed to deflect them, so we want to move past that idea.”

In planning and establishing Body+, the girls sought guidance from the Health and Counseling Center to get an understanding of topics to avoid that could trigger certain destructive behaviors. The group doesn’t discuss eating disorders or self-harm, for example, and Laura and Ginny are prepared to refer members to counseling if they think anyone is at risk.