“One Drop of Love”: A Search for Identity 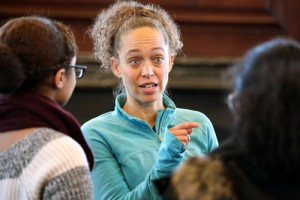 “Are you going to join the Black Student Union?” a fellow University of Michigan student asked Fanshen Cox DiGiovanni in her first semester of college. Ms. Cox DiGiovanni hesitated: Her heritage couldn’t be summed up in one word. She’s Jamaican, Cherokee, Blackfoot Indian and Danish, she explained to her classmate.

“You don’t get to decide what race you are,” the other student told her. “They’ve already decided for you.”

Performing her one-woman multimedia show “One Drop of Love,” Ms. Cox DiGiovanni periodically scanned the faces of students in the Fitzgibbons Convocation Center as if she were collecting United States census data, using methods from the 1700s up to the present day. Methodology of census taking throughout history has grouped people into single, incomplete racial categories without considering the multiracial identities of many Americans. The title of Ms. Cox DiGiovanni’s show references rigid laws categorizing people as black if their ancestry included even “one drop” of African blood, which exposed them to legal and social discrimination.

In the show, Ms. Cox DiGiovanni explores her own racial identity throughout her family history, as she attempts to make amends with her Jamaican father, after he avoids attending her wedding to an Italian man. As a young person she aimed to fit in, even eschewing her unique name. (Her parents, both civil rights activists, chose a Chinese word whose revolutionary meaning is to turn over, or bring about change.) “I tried to make myself invisible,” Ms. Cox DiGiovanni told students after the show. “Anything that made me stand out, I wanted to run away from. Now, I love my name, but it took me a long time.”

Ms. Cox DiGiovanni is an educator—she taught English as a second language in the Peace Corps and in California—in addition to being an actor and producer. (“One Drop of Love” is co-produced by Ben Affleck and Matt Damon). She performed for Milton at the invitation of the Office of Multiculturalism and Community Development.

Through conversations with her parents, brother and grandmother, as well as a traumatic Peace Corps service mission in Cape Verde, West Africa, Ms. Cox DiGiovanni explores the intersections of race, gender and class in her life. “Without the context, we only understand a fraction of who we are,” she says. “It’s like filling out a form on a census.

“I am a culturally-mixed woman, searching for racial answers,” she says. “And I’m going to keep on searching, no matter how scary the questions and answers might get. I’m not going to hide from them, and I’m not going to pretend like they don’t exist, because maybe that is how we can all get a little bit closer to some peace, and some justice, and then perhaps, even one drop of love.”