One Republican Outlines His Change of Heart on Climate Change 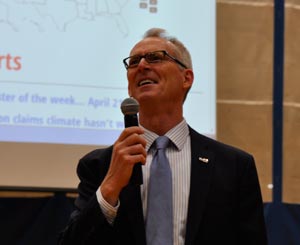 A revenue-neutral reduction in carbon emissions is within reach for the United States, former U.S. Representative Bob Inglis told students recently. He says that achieving it, however, will require politicians who deny mankind’s effects on the climate to change their tune.

“There are people who say that humans aren’t responsible for changes in the climate, but that is contradicted by the research and opinions of 97 percent of climate scientists,” Mr. Inglis said. “Frankly, we’d better hope that climate change is human-caused. If it’s human-caused, we can do something about it. If it’s not, we’re hosed.”

Mr. Inglis is the founder of RepublicEn—a network of Republicans acknowledging humankind’s impact on climate change. He proposes a carbon tax that would provide financial incentive for manufacturers to lower carbon-dioxide emissions. Mr. Inglis’s plan would also encourage foreign companies to export, to America, products with lower environmental impact, through implementation of a border tax. He believes there are other areas of the federal budget in which taxes can be lowered to offset costs.

If RepublicEn can persuade 25 House Republicans to vote for a carbon tax, Mr. Inglis believes that he would have majority support by 2022. Currently, several conservative Republicans in Congress deny any human role in changing climate, Mr. Inglis says. In his early terms representing the most conservative district in South Carolina, he was one of them. Now, he supports environmental proposals long heralded by former Democratic Vice President Al Gore.

“I was pretty ignorant,” Mr. Inglis acknowledges. “All I knew was that if Al Gore supported something, I opposed it. But after time spent understanding the research, I realized that the problem was too big to ignore.”

As a congressman, Mr. Inglis was a ranking member of the House Subcommittee on Science and Technology. He cites two trips with the science committee as instructive to his views on climate change: First was a visit to Antarctica, where he watched researchers gather ice core samples, which showed distinct environmental changes that correlate to the start of the industrial revolution. On a subsequent trip to Australia, Mr. Inglis, who is Christian, was inspired by the man who guided him around the Great Barrier Reef, saying that he showed a religious reverence to his natural surroundings.

When Mr. Inglis was running for reelection in 2010, his son, who was voting for the first time, told him he’d have his vote, but he needed to embrace the science of climate change. When he publicly acknowledged the human influence on climate change, Mr. Inglis lost his congressional seat in a primary to Trey Gowdy, the Tea-Party Republican currently representing South Carolina’s 4th district.

Practices like coal mining are not only the cause of excessive greenhouse gases, they also have devastating effects on health. By imposing a carbon tax that penalizes pollution, Mr. Inglis believes that business will adjust to new, safer standards.