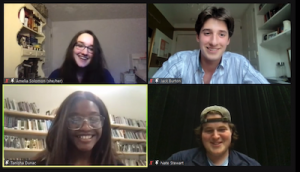 The objects, photos, people, and places we choose to hold dear can help us keep memories alive and anchor us in our identities, students in Project Story: Narrative Journalism and Performance demonstrated last week.

Four students, Jack Burton ’22, Tanisha Dunac ’21, Amelia Solomon ’23, and Nate Stewart ’21, narrated the transcriptions of interviews they conducted with peers and adults at Milton. They compiled the narrations into a 30-minute original performance called Keepsakes, which was shared via video.

Keepsakes are the “things we keep because of the memories they hold within them, because we want to hold onto the parts of other people or times in our lives that we attach to objects,” Solomon said.

Faculty and students shared stories about objects with significant emotional meaning for them, including family heirlooms, photos of ancestors, stuffed toys, artwork, and jewelry. Some were “transitional objects,” things that comforted their holders during major moments in their lives, while others were unique things that called back memories of travel, childhood, and loved ones.

Following the narration, the performers shared their own keepsakes: Burton has saved the ballots from his Middle School speech tournaments, Solomon the stuffed penguin she snuggled as a baby, and Stewart shared the varsity letterman’s jacket from the outstanding 2019 Milton football season. Stewart earned the jacket as a junior, and said it reminds him of an important year with his “brothers” on the team; he had looked forward to wearing it on game days as a senior, but the football season was canceled due to COVID-19. Still, the jacket is a keepsake that he will hold onto forever, Stewart said.

Dunac’s keepsakes are her acceptance letters to Milton and Swarthmore College. The day she learned she got into Milton, her mom surprised her with her acceptance letter, laminated and in a blue and orange folder. It reminds her how much she’s grown and become more confident since her Class IV year. “I love this place,” she said. “It is my keepsake.”