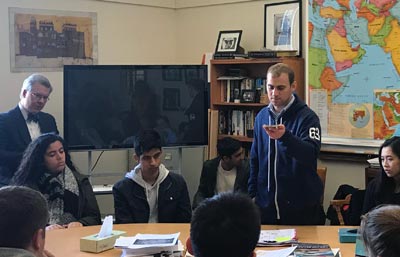 Jordan Hattar’s interest in international humanitarian causes formed in eighth grade. By the time he graduated from high school, he was ready to go to work, he told Milton students.

But all of the aid missions and nonprofits he contacted responded the same way: You’re not ready. Come back after college. Mr. Hattar persisted, eventually connecting with Deng Jongkuch, one of the “Lost Boys” of South Sudan, who agreed to take him there to help build a medical clinic and distribute mosquito nets.

“Deng taught me that you don’t always need a specific skill to make a difference,” Mr. Hattar said. “You just need a heart.”

Mr. Hattar visited Milton at the invitation of the School’s Amnesty International chapter and the Mediterranean Club.

After South Sudan, Mr. Hattar returned to the United States to study international affairs and Arabic at California State University, Long Beach. His Arabic professor, a Syrian native, shared stories about the growing, violent conflict within the country, spurring Mr. Hattar to go abroad again, this time to the Zaatari refugee camp in Jordan. There, he saw that the tents housing tens of thousands of Syrian refugees were inadequate protection against rain and cold.

Mr. Hattar founded Help4Refugees, and the organization raised enough money to provide two prefabricated housing units to the camp by 2013. His goal is to build support by focusing on the human impact of the Syrian conflict, sharing stories about daily life for refugees living in the camp and resettling throughout the world.

Student groups and governments have continued to donate the safer housing units to Zaatari. After Mr. Hattar visited Milton last year and spoke to Andrea Geyling-Moore’s Activism for Justice in a Digital World class, Maggie Shields (I) and Natasha Roy (II) organized Rewear for Refugees. They encouraged students to reuse or swap formalwear for School events and donate the money saved to help Syrian refugees; Mr. Hattar shared that the money raised was used toward training nurses in the camp.

During the assembly, Mr. Hattar opened a Skype session with Sari Samakie, a Georgetown University student and Syrian refugee. As a teenager in Aleppo, Mr. Samakie was kidnapped and detained three times before fleeing to Jordan. Mr. Samakie said speaking out is his way to honor the Syrian civilians who have been killed in the conflict, and said he hopes displaced Syrians will someday return home safely.

Watch video of the assembly.

“We’re so familiar now with this war that we’ve become desensitized to the deaths of Syrians,” Mr. Samakie said. “I ask people to try to see the human face of the war. When we are empathetic in looking at problems, we start thinking of creative ways to solve them.”

Mr. Hattar received his master’s degree in international relations and politics from the University of Cambridge. He pursued and ultimately earned—after eight applications—an internship in the office of former First Lady Michelle Obama. Since leaving the White House in January 2017, Mr. Hattar has delivered more than 180 presentations in more than 30 countries on the Syrian refugee crisis and its international impact. His work providing housing units in Jordan was featured in the 2016 documentary, “After Spring.”