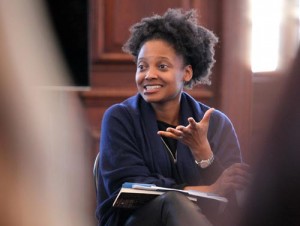 Some of Ms. Smith’s poems reflect on current events in the United States, addressing topics such as hate crimes, violence and justice. She uses these poems to “exorcise the news stories that constantly run in [her] brain.”

“A poem can be a tool for thinking about who we are as a nation. A poem is a great place to discover something, to push against some of my own opinions, and to figure out the way I, myself, can be implicated in some of the problems we face today,” says Ms. Smith.

She read excerpts from her poem, “They May Love All That He Has Chosen and Hate All That He Has Rejected,” in which the victims of actual shootings write postcards to their assailants from famous landmarks around the country.

Other topics reflect the wide net she casts when she writes—poems about grief over losing her parents, African American soldiers’ experiences in the Civil War, and the future from a science fiction angle.

“A poem asks us to sink into our self. To find the quieter, less pushy voice that you might contain. That is what I’m always trying to do. As a writer, you try not to sound like yourself and to come up with different ways of writing about things.

“I never know where a poem is going when I start it. I just follow the idea where it leads. The fear of a blank page is something that never goes away. But I try not to worry too much. I like to remember that the stakes are pretty low when I’m writing a poem!”

Ms. Smith wrote the critically acclaimed memoir Ordinary Light, shortlisted this fall for the National Book Award in Nonfiction, and three books of poetry. Her collection Life on Mars won the 2012 Pulitzer Prize and was selected as a New York Times Notable Book. Ms. Smith’s Duende won the 2006 James Laughlin Award from the Academy of American Poets and an Essence Literary Award. The Body’s Question was the winner of the 2002 Cave Canem Poetry Prize. She was the recipient of a Rona Jaffe Writers Award in 2004 and a Whiting Award in 2005. In 2014, the Academy of American Poets awarded her with the Academy Fellowship, awarded to one poet each year to recognize distinguished poetic achievement. After her undergraduate work at Harvard, Ms. Smith earned her MFA at Columbia.