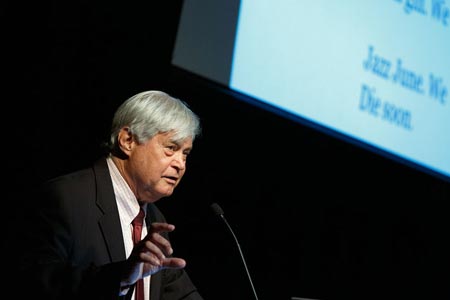 In works that explore the intersection of ubiquitous moments in history and intimate, personal narrative, poet Ron Smith asks, “What is my place and what keeps me in it?”

On campus as the Bingham Visiting Writer, Mr. Smith read selections spanning his career as a poet, and later visited students for a smaller Q&A. In between his poems at the reading, Mr. Smith provided context and described his writing process.

The first poem he read, “At the Vietnam Memorial, 1983,” came from Mr. Smith’s first visit to the memorial in Washington, D.C., where he felt incredible anger and sadness upon seeing the black marble wall.

[…] I was there. It’s black, but
I had seen the pictures. I walked
beside a wall of small names
to find Wells and Strobo,
who never knew each other.

But they both loved fast cars
and hated school more than I did.
Which is why they are carved
in black and I can drive to see them…

Poetry comes from the subconscious, Mr. Smith said. Great poetry can’t be created by simply adhering to form and style.

“The number-one job of any writer, in any genre, is to tell the truth,” he said. Even though poetry is fiction, it must be authentic, rather than simply providing an historical account. Mr. Smith spoke about the craft without sentimentality—he described filling notebook after notebook with drafts of poems during his first visit to Italy, but only producing one complete poem. He had to first get over his feelings of wonderment about Italy.

Mr. Smith urged students to hold on to the poetry they write at this point in their lives. He found some of his early poems as an adult and destroyed them out of embarrassment, something he regrets now.

“Hold on to that stuff. It might embarrass you next year, or in two years, or in ten years,” he said. “But then it takes on a form of nostalgia. You might be able to use it. You can give your worst poem to a character in your novel.”

A native of Savannah, Georgia, Mr. Smith is the author of Running Again in Hollywood Cemetery, Moon Road, Its Ghostly Workshop and The Humility of the Brutes. A distinguished poet and critic, his work has appeared in many periodicals, including The Nation, Kenyon Review, New England Review and The Georgia Review, as well as several anthologies. He holds degrees from the University of Richmond and Virginia Commonwealth University, and has studied at Bennington College, Worcester College at Oxford University and the Ezra Pound Center for Literature in Merano, Italy. Mr. Smith was selected as an inaugural winner of the Carole Weinstein Poetry Prize in 2005, and now serves as a curator for the prize, and he was Poet Laureate of Virginia from 2014–2016. He teaches at St. Christopher’s School in Richmond, Virginia and as an adjunct professor at the University of Richmond.