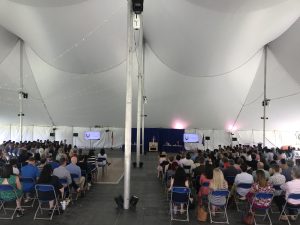 The Class of 2021 gathered under a tent on the Quad to celebrate their peers at the Prize Assembly. Awards recognized overall student achievement as well as achievement in the performing arts, visual arts, English, science, math, classics, computer science, modern languages, history, public speaking, student publications and athletics.

Congratulations to all of the prize recipients, including a few junior students. Below is a complete list of awards:

THE HEAD OF SCHOOL AWARD

The Head of School Award is presented each year to honor and celebrate certain members of Class I for their demonstrated spirit of self-sacrifice, community concern, leadership, integrity, fairness, kindliness, and respect for others.

To the Head Monitors.

To two students, chosen by their classmates, who have helped most by their sense of duty to perpetuate the memory of a gallant gentleman and officer.

To a student who has best fulfilled their potential in the areas of intelligence, self-discipline, physical ability, concern for others and integrity.

Created in 1956 in memory of Frederick Sprague Barbour ’46, Thomas Amory Hubbard ’47, George Cabot Lee, Jr ’47, and Sherrod Emerson Skinner, Jr ’47, who gave their lives for their country and the United Nations. Awarded to students from abroad to enable them to further their education at Milton Academy, and who enrich the Milton community through their participation.

To students who demonstrate high moral integrity, support classmates, and have established meaningful relationships with peers and faculty. The Millet scholars, by virtue of their character and deeds, are integral members of their class and hold great promise as future leaders.

Awarded to a student or students in Classes I–IV, who, in working within one of the culture or identity groups at the school, has made an outstanding contribution to the community by promoting the appreciation of that group throughout the rest of the school.

Awarded to the student or students who, in their years at Milton, have shown a dedication to the pursuit of outdoor skills, demonstrated strong leadership, and reached high levels of personal achievement in one or more outdoor activities.

THE A. HOWARD ABELL PRIZE

Established by Dr. and Mrs. Eric Oldberg for students deemed exceptionally proficient or talented in instrumental or vocal music or in composition.

Awarded in recognition of helpful activity in furthering in the school an interest and joy in music.

Awarded in memory of George Oldberg ’54, to members of the school who have been a unique influence in the field of music.

Awarded to students who have demonstrated genuine curiosity, enthusiasm, as well as remarkable scientific growth in physics, chemistry and/or biology.

Awarded in honor of Donald Wales who taught Class IV science for more than 36 years. It recognizes students in Class IV who have consistently demonstrated interest and excitement in science.

For pre-eminence in physical efficiency and observance of the code of the true sportsman.

THE A. O. SMITH PRIZE

Awarded by the English Department to students who display unusual talent in non-fiction writing.

Awarded by the English Department for the best essay about a work or works of literature.

THE MARKHAM AND PIERPONT STACKPOLE PRIZE

Awarded in honor of two English teachers, father and son, to authors of unusual talent in creative writing.

To a Class I student who has demonstrated an outstanding attitude and commitment to athletics at Milton. She models exceptional sportsmanship, leadership and dedication, and she serves as an inspiration and role model to her teammates and others.

Awarded to students in Class I who have achieved excellence in the study of mathematics while demonstrating the kind of love of the subject and joy in promoting its understanding which will be the lasting legacy of Donald Duncan’s extraordinary contributions to the teaching of mathematics at Milton.

Awarded for unusual contributions of time, energy and ideas in theatre production and in technical assistance throughout a student’s career.

Presented by the Performing Arts Department for outstanding contributions in production work, acting, speech, audiovisuals, and dance throughout a student’s Milton career.

Awarded for outstanding contributions to Milton Performing Arts throughout a student’s career in both performance and production.

To a student in her Class I year, recognizing exceptional athletic skill and admirable contributions to her team. This talented athlete demonstrates a strong work ethic and conducts herself with a spirit of teamwork and good sportsmanship.

To members of the First Class, who, in Public Speaking and Oral Interpretation, have shown consistent effort, thoroughness of preparation, and concern for others.

Created by his students of 1984 in his memory and honor, this prize in Classics is awarded to the student from Latin 4 or beyond who best exemplifies Mr. Daley’s love of languages.

For self-sacrifice and devotion to the best interests of his teams, regardless of skill.

To members of the Second Class, outstanding in Mathematics, Astronomy, or Physics.

Established in 1911 and awarded to Class I students who, in their study of history and social sciences, have demonstrated interest, outstanding achievement, respect for others, and a deep curiosity about the human experience.

Awarded on the basis of a separate test at each prize level.

Awarded to those students who, in the opinion of the Department, most exhibit the qualities of academic excellence, enthusiastic participation, and support of fellow students, both in and out of class.

Awarded for imagination and technical excellence in art and for an independent and creative spirit of endeavor.