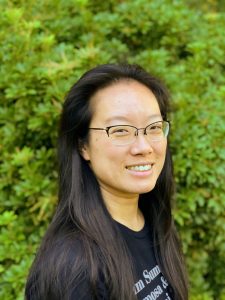 New Math Department Chair LeeAnn Brash joined Milton, along with three other new math teachers, just before the start of this school year. Although it’s been an atypical year, she has spent the fall teaching Honors Calculus and Geometry and getting to know students and fellow faculty members.

How have your first few months at Milton been?
Very good. There are a million things happening with the COVID-19 pandemic that normally wouldn’t be part of the picture, but all things considered, it’s been really great. The Math Department has been incredibly welcoming and supportive, and I’ve had really good support so far from the other department chairs that I’ve met. There are four of us new to the department this year (Brash, Akinade Adeboye, Cory Bhowmik, and Hubert Hwang) and we’re all people of color, which is really cool.

What kind of leadership approach are you taking with the Math Department?
Right now I’m trying to get to know everybody well. A friend of mine shared incredibly good advice that her mentor had given her, which is that the first year you’re in a new place, you’re getting to know the place. The second year, the place starts to get to know you. And from the third year forward, you work collaboratively together in an effective way. Right now, I’m getting to know how this place works, and what its culture is. The students have been really helping with that. My calculus students have been really sweet, telling me all the things they love about Milton and what excites them about being students at Milton. Even within the first week of classes, they were telling me about the big events on campus throughout the year that get people hyped up.

Can you tell us a little bit about your background?
I went to Harvard, which is where I had my first interface with Milton. My college roommate was a Milton grad and I have a bunch of friends who went here. I majored in math in college, and then I stayed in the area. I worked in software engineering for a while, then I taught at Wellesley College. After graduate school, I taught at the Cambridge School of Weston, and was there for 11 years before I came to Milton.

What about math excited you as a student?
I liked working with abstract ideas and the idea that you could build a whole mathematical system that isn’t something people already know. There are spaces to explore. The things that are possible with math are fascinating to me. It’s a lot like philosophy in the way that you can say, ‘Let’s take what we know and go someplace we haven’t been. What can we put together that will hold together on its own?’ There is always a new and creative way to think about a concept.

How do you approach students who are intimidated by math?
A big value in studying math is that a student can face a challenging problem and not know how to do it at first, but then start with ‘OK, what do I already know, and building on that, where can I go from there?’ And then, one step at a time, they work toward the solution. The point isn’t that every student will learn to love math and become a mathematician. The point is to show students that you can face a difficult problem and figure it out. The most important thing is that students are supported on that journey.

There is no other field of study that has a specific anxiety about it. Math anxiety has been studied by psychologists. There’s no English anxiety, no history anxiety, no science anxiety, no music anxiety. If the messaging that a student receives is that people are either ‘good at’ or ‘bad at’ math, then they think those are their only options, that they are somehow intrinsically good or bad at something forever. That kind of language really disempowers people, and it can start when kids are very little. In reality, math is something that students can practice, a skill that can be developed over time.

Milton has made a commitment to anti-racist teaching across disciplines. How does that look in math?
It applies to math a lot, much more than people realize, because there’s a lot of public perception that math is separate from social issues. Even when we think of how math developed, American education focuses on the ancient Greeks, and then German, English, and French developments, but math has been studied long before those Western traditions. The concept of Pascal’s triangle is a really great example: Pascal lived during the 17th century, but the concept is documented in China, on actual paper, about a thousand years earlier.

Some of anti-racist teaching in math requires teaching that the origins of mathematics are all over the world and not just in white, European societies. The House of Wisdom in Baghdad sent scholars all over the world to learn and bring back knowledge; many people don’t think about the Middle East as an intellectual powerhouse, but it is. Some of the geometry we study now originated in ancient Egypt because they used it to plan for flooding of the Nile each year. Across the hundreds of different cultures in Africa, there were some of the earliest records of mathematics, and ancient civilizations in South America, the Pacific Islands, indigenous Americans, all used mathematics, but it’s not celebrated in European-centric education.

That perspective is necessary, and representation is necessary; STEM fields continue to be largely white and male. Students of color need to be encouraged. And then, mathematics can be used to pull apart statistics and as a tool for finding the objective truths behind things that are manipulated in messaging, which is important when we talk about the things that disproportionately affect people of color. Race and socioeconomic issues also come into play when we think about how students are placed in math courses and who has access to advancement.

What do you do when you’re not teaching?
I help run a semi-professional choir in Boston, and right now we’re trying to figure out what to do in this now-defunct holiday season. Outside of the pandemic, I like to rock-climb, and I am involved with an adaptive climbing club in Watertown for people with physical disabilities. When I have the time, I like curling up with my son and reading together, and just spending time with my family.