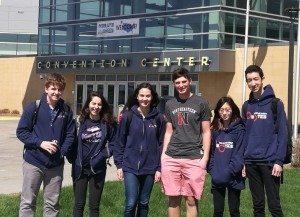 For the first time, the Robotics Team competed in a national championship, traveling to Council Bluffs, Iowa, for the CREATE U.S. Open of Robotics, one of the largest robotics tournaments in the world. Chris Hales, a math and computer programming faculty member, accompanied six students from the team and said it was a great experience. Milton’s team came in 70th out of 250.

Senior team co-heads Anne Bailey and Isabel Basow said one of the biggest surprises was the team spirit and enthusiasm displayed by all the attendees. “I expected it to be very serious. You work on your robot, compete and just get it done,” says Isabel.

“But everyone was really into it,” says Anne. “They decorated their areas, hung state flags. There were “spirit bots,” robots that were just for fun and would high-five you or throw candy as you walk by.”

The team competed with their robot “Tokyo Lift” and despite a few technical issues that cropped up during competition, the team was happy with their performance. Anne and Isabel said they also took away some inspiration for the future.

“We got a lot of ideas for robot design,” says Anne. “And for the team in general. We learned a lot about team dynamics by observing how other teams work together. We saw different ways to distribute tasks and help rookies.”

Junior co-heads Truman Marshall and Carson Prindle, along with Thomas Elliott (II) and Sarah Hsu (III), were the other members of the team at the championship.