The Robotics Team Rolls On to Advanced Competition 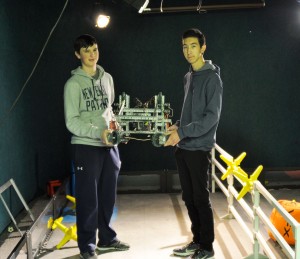 The Robotics Team’s robot, named “Tokyo Lift,” won the robot skills competition, the excellence award and the championship at the VEX Robotics Qualifier Tourney in Hopkinton in December. Milton had two robots entered in the competition and the winning robot moves on to the state competition in March.

Truman Marshall (II) and Tommy Elliott (II) were the leads on Tokyo Lift. Truman said, “we knew we had a good design” but “were pleasantly surprised” by their success. The “Starstruck” competition is played on a 12’x12’ square field, where the robot picks up and moves “stars” and “cubes” into particular zones. After playing qualifying skills matches, teams from different schools form alliances. Then, the object of the game is to attain a higher score than the opposing alliance. Truman’s and Tommy’s alliance won the whole competition.

Tommy said Tokyo Lift was built new this school year and the team can still make modifications to the robot before the next competition. Around 15 students meet officially twice a week in the Robotics Team room in the basement of the AMC, but Tommy said they work on the robots almost every day after school and during free periods.