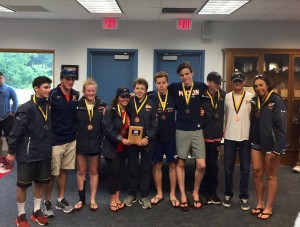 An epic sailing season ended on a high note when Milton placed third in the ISSA Baker Team Race Championship held in Norfolk, Virginia, this past weekend. The national race consisted of the top 12 teams from around the country. Milton qualified for the race after placing second at the New England team racing championship held at Bowdoin College.

“Going undefeated was my proudest moments,” says Eli Burnes (I), one of the co-captains of the team. “We had to be very focused all season because every race counted.”

Fellow co-captain Ginny Alex (I) said their biggest meet win was against St. George’s School. “We have a deep and strong team, so when we went to St. George’s, we could send our girl sailors to compete in the NESSA Women’s Championship (Herreshoff Regatta), which was held at the same time.”

This past weekend’s appearance at the Baker race was the first time for Milton Academy since 2007. The weather was not ideal with low wind and intermittent storms. “We were disappointed that wind wasn’t better, but we have strong skills so that it didn’t hold us back too much,” says Ginny. “We all went in really wanting to win, but coming out of it we were still happy with our third-place finish. We’ve grown so much as a team. During our freshman year, our goal was make it to New England’s by the time we were seniors, and now as seniors, we made it to team racing nationals once and to fleet racing nationals twice.”

Coach Patrick Broome agrees. “If you had told me four years ago, when they were freshman, that they would be third in the country for fleet racing and team racing as seniors, I might not have believed you. As this season progressed, we were sort of waiting with bated breath, trying to stay even-keeled and not get too far ahead of ourselves. We learned some lessons from last year, and applied that to our training this year.”

Along with Ginny and Eli, graduating team members include Henry Burnes, Peter Barron and Christina Sakellaris. They are passing the torch to other team members such as Charlie Hibben (II), Hunter Zonnenberg (III) and Julia O’Connor (III).