“School Girls; Or, The African Mean Girls Play” is This Fall’s 1212 Play 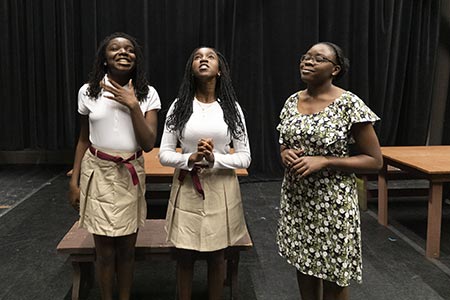 This fall’s 1212 play, School Girls; Or, The African Mean Girls Play, is a comedy that tackles issues of colorism, colonialism, beauty standards, and the social hierarchy among teenage girls.

“Our play immerses the audience into the world of black girls, something that never happens,” says Nyla Sams ’20. “It also tackles societal problems that are, for the most part, ignored by everyone other than the group they affect. It is so exciting to bring this conversation to Milton, and on top of all that, it’s a fun play.”

Nyla plays Paulina, the “queen bee” of the exclusive Aburi Girls Boarding School in Ghana. Paulina’s dominance among her peers starts to crumble upon the arrival of Ericka—played by Katie Cabrera ’21—who transfers to the school from America during senior year. Ericka receives attention for her lighter skin, and the story highlights the imbalance and unfairness of beauty standards that often center white, Western features—even among people of color. The play, written by Jocelyn Bioh, takes a comic approach to the differences and similarities faced by girls around the world.

The characters are complex and multifaceted, says Katie, giving them depth and individuality. Audience members who have struggled to fit in anywhere will relate to the story, she adds.

“This show’s power comes primarily from the fact that it allows women of color to be seen as simply people, rather than victims,” she says. “It diverts from the typical, monolithic depiction and single story of Africa and African girls in particular. This show elevates the voices of girls who are often portrayed from a single perspective.”

Performing arts faculty member Patrice Jean-Baptiste is directing School Girls. The cast is small—just eight girls—but Patrice has found tasks for students who didn’t get parts, including assistant-directing and costuming. The 1212 play—named for the room in Warren Hall where the bare-bones, small production got its start—has a spare set design, but Patrice has sought out costumes that would look authentic in a Ghanaian school.

“The best parts have been where we’re not acting, where we’re not working, and the cast is just talking about some aspect of the play, and they’re really digging into questions like ‘What is it like to deal with this?’ ‘What makes someone beautiful?’ ‘Who’s got the perfect hair and who doesn’t?’” Patrice says.

Cast member Mia Adriko ’21 is new to performing. Mia, who is from Uganda, says, “The most challenging thing so far has been trying to find a common ground between my African identity and my character’s African identity. The most rewarding thing has been what I’ve gained by stepping entirely out of my comfort zone.” Working on the show has shown Mia the power of media images to “trickle down to affect young people in even the most unexpected places.”

School Girls runs from Thursday, October 31, to Saturday, November 2, in the Studio Theatre of the Kellner Performing Arts Center. Thursday and Friday shows begin at 7:30 p.m. and Saturday’s performance begins at 7 p.m.