Shaping the World for the Next Generation of Programmers 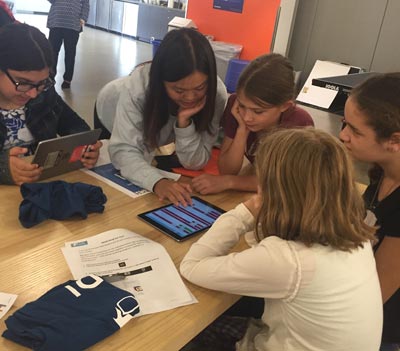 For the second year, Milton students volunteered to mentor middle- and elementary-school students at HUBweek’s Girl Hackathon, a Boston event that encourages young girls to develop a love of computer programming and coding.

Jessica Wang (I), Charlotte Moremen (II), Amaya Sangurima-Jimenez (II) and Jen Zhao (II), served as mentors during the hackathon. Using Hopscotch, a kid-friendly coding app, teams of two created games, later presenting their projects to the group. It’s not a competition; it’s a chance for girls to explore the possibilities of coding in a collaborative and supportive setting, and to be proud of their creations, says mathematics faculty member Emily Pries.

“The girls from Milton pushed the teams to think about different methods,” says Emily. “They identified the challenges the teams faced and helped them think about where in the code they could find solutions.

“It was a chance for the younger girls to show off. There were some fun glitches that are part of the process in demonstrating what they built,” she adds.

Girls’ interest in programming continues to rise at Milton. This year, a group of Upper School girls are mentoring students in the Middle School, which now teaches coding at all grade levels.

“It’s really exciting to see,” says Emily, who is in her first year teaching at Milton. “Having coding in the geometry classes is a really good way to show what coding actually looks like, which is something creative and collaborative and very much driven by what you envision, instead of something out of a textbook.”

Technology is present in every aspect of life, and Emily wants her students, especially those who may have felt excluded from tech spaces because of stereotypes, to know that a programming education can help them develop technology that could change the world.

It is still difficult to be a woman on the internet—and much of the collaboration in coding takes place online. Misogyny in online communication is rampant, and the tech world is not immune, Emily says.

“People need to think seriously about the world they want to work in, and understand that they have a role in shaping it,” she says.

What’s exciting about girls learning programming at younger ages is that they don’t have any preconceived notions about what the programming world is “supposed” to look like.

“There is definitely a segment of the programming world that explicitly prides itself on being a boys’ club,” she says. “There’s a mindset that they have this secret knowledge, but the reality is that anybody in the world can be a programmer. Anybody.”

Technological and programming aptitude can enhance a person’s skill set in any academic or career field, Emily says. “Whatever it is that you’re interested in, technology can be a multiplier for you.”