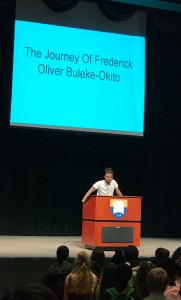 Just before graduation, underclassmen see the fruits of the seniors’ work at the Senior Project Fair in the ACC. Senior project performances also take place around campus over three days. Freddy Okito gave an emotional TED-style talk of his journey from a Rwandan refugee camp to becoming a student at Milton. Award-winning poet Letitia Chan read a selection of her poems. Marshall Sloane and Elliot Burnes held a debate on Adam Smith’s Wealth of Nations.

Desi Rosas showed her film, “Destigmatizing Pole Dancing.” Desi, a lifelong dancer, explored the history of pole dancing and acrobatics across different cultures, from China to India to the United States; she also took classes at Boston Pole Fitness and interviewed contemporary pole dancers. Only in the last century has pole dancing been associated with stripping and exotic dance, she explains, and it is becoming an increasingly popular fitness activity. “It takes an incredible amount of strength and skill,” Desi says. “It’s also a really inclusive space. Anyone can learn how to do it.”

At the project fair, Finley Congdon safely demonstrated replicas of ancient and medieval weaponry, which he constructed at home. His work included a large trebuchet, which uses a counterweight to drop a lever and fling items a long distance; an English-style long bow; and a gastrophetes, an ancient Greek crossbow that uses the force of a person’s body weight to shoot greater distances.

“When I was a little kid, I always wanted to be a knight,” he says. “As I learned more, I became really interested in ancient military technique and warfare, so I decided to explore the devices that different cultures used.”

Finley found that cultures and tribes sometimes made similar advances in weapons styles contemporarily, despite being located on different continents. His favorite project was the long bow, which required diligent pressure on the wood to increase its flexibility. “It’s a lot of work, but it’s incredibly rewarding when it works,” he says.

Silas Monahan and Henry Burnes also completed a woodworking project, using a shop in Silas’ basement. They experimented with different kinds of hard wood, crafting an oversize cribbage table using cherry and sapele woods, supported by maple and sapele legs. They used a lathe, which is a tool to shape wood, to craft the pegs for the board. Additionally, they made a pair of snowshoes, a project that presented a few stumbling points. “We started the project by building a steamer, so we’d be able to bend the wood, but we built it too large at first. The wood wouldn’t become saturated enough for us to bend it,” Silas says. “The next day, we found some 3-inch PVC pipe and used that, and it worked within a few hours. It was a lot of trying different things before we found the right solutions.”

Three students, Zhenfeng Qui, Thomas Hannah and Harrison Jia, analyzed the factors that make memes—pieces of internet content such as a funny photo with text, or a video—go viral. They studied behaviors and data on Reddit, a social content aggregator, and created several memes to observe their performance. “I think the important thing is knowing your audience, and what typically catches on quickly with them,” says Thomas. “Some of it was easy and intuitive because we’ve grown up with memes and know the language of them, but it did take work to figure out the best time and content to get the biggest reaction.”

Bobby Beniers built a “smart mirror,” which connects with an app he developed. The mirror, built using two-way glass, displays content that a user selects, such as the time, morning headlines, driving time to the user’s workplace or school, and even some motivational words. Bobby also built an alarm clock that works with the mirror and can wake the user up with music they designate through the app. “I’ve always been interested in the interconnectivity of things, and ways to make life and homes more efficient,” Bobby says.