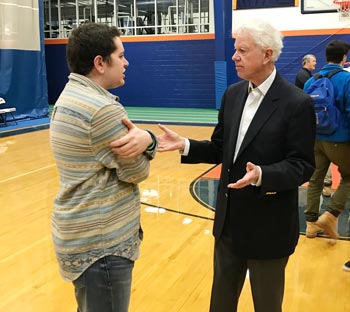 Well-known sports journalist Bob Ryan made the case that sports play an important role in people’s lives whether they are athletes or fans. Along with other “leisure pursuits” such as books, movies and the arts, Mr. Ryan said sports “fill a gap.” He spoke to students this morning at the Athletic Assembly.

“Some people say sports are just entertainment,” said Mr. Ryan. “But sports are unscripted, which is what makes them different from just entertainment. When you go to a concert, you don’t want to be surprised; you want to hear the music you expect. With sports, there is a good chance for surprises.”

Mr. Ryan recounted the final minutes of the Super Bowl XLIX in 2014 when the Seattle Seahawks were about to score in the final seconds to win the game. Every Patriot fan dejectedly thought it was over. But Malcolm Butler, a rookie player no one heard of, made a game-saving interception and the Patriots won the game.

Mr. Ryan also spoke about the enormous popularity of sports talk radio, now the number-one format of radio in the United States. The problem, he said, is that in order to make sports fresh and interesting every day, “We have to create controversy. And now sports are framed around ‘Who can we blame for the loss?’ It shouldn’t be that way. Sometimes you win and sometimes you lose. But now we parse every single game and indentify blame and guilt. And I’m part of the problem, too.”

And although he is a huge college sports fan, he said that college athletics has “grown so big, into a multibillion-dollar operation that it’s become a sausage factory and it is out of control.”

Mr. Ryan is a retired columnist for the Boston Globe’s sports section, where his work still appears semi-regularly. He has been writing for the Globe since 1968, covering all of Boston’s sports teams. Ryan is also a regular panelist on ESPN’s Sunday morning roundtable, “The Sports Reporters.”