The Story Behind Students’ “Ode to Joy” 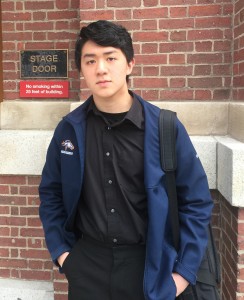 For students, the few days before and continuing into the March break were unsettled. John Matters ’22, a talented violinist, was supposed to perform with the Wellesley Symphony after winning a spot in a  competition last fall. He was also supposed to tour with Milton’s Chamber Orchestra and continue rehearsals with the Boston Philharmonic Youth Orchestra. After everything was canceled, Matters looked for another way to connect musically.

“In any big event, music can bring unique power to people, but how could I provide for the community with music?” Matters asked. Then Music Department Chair Adrian Anantawan shared a video of himself playing Bach in a split-screen video and John said he knew what he wanted to do.

“Although members of the Milton community were unable to meet each other in person, we could still stay in contact and play music together in a special way,” he said. “We could let everyone know that although we are separated physically, we can use music to connect together and stay strong.”

Matters’s idea was to have Milton’s musicians play Beethoven’s “Ode to Joy” remotely but together. At first, he wasn’t sure how to implement it. “The whole process, from choosing the correct music version in the beginning all the way to the final edits, challenged me to step out of my comfort zones. Every part of organizing this ‘Ode to Joy’ was brand new to me despite its simplicity.”

Matters said the musicians had to “play extremely precisely, or else any minute flaw would be magnified greatly.” Another challenge was editing because he lacked video editing experience. He spent many hours trying out different software and working out the kinks.

Many students and faculty members helped out immensely, Matters said. Carolina Bragg ’21, head of the student Classical Music Club but not a Milton Chamber Orchestra member, offered to play cello. Zan Huang ’20 offered to arrange the piece. Anthony Zhao ’22 helped with the narrative segment in the end. Mr. Goode, the winds instructor, sent in a recording.

“Ben Kim ’22, despite his flight being delayed multiple times, insisted that I wait for his recording,” Matters said. “The night he arrived home in Korea, he recorded a video at three in the morning. Dr. Anantawan gave me helpful advice. These are just a few people who contributed. Ultimately, it was everyone’s participation that made this project possible.”

At 16, Matters’s music bio is impressive. He has participated in numerous competitions, including earning the bronze award in the Asia Strings Competition (Taiwan), winning the Music Fest Competition and performing at Carnegie Hall twice, winning the first place of California Temple City talent show, winning the Young Artists Instrumental and Vocal Competition of Gaithersburg Maryland, winning and playing in the recital of the Rockville Competition for Solo Piano & Solo Strings, earning honorable mention award of 2020 Eleanor B. Nelson Concerto Competition (Quincy Symphony Orchestra), being a finalist in the BSO Concerto Competition, and first place of 2020 Elite International Music Competition. The Wellesley Symphony has already told Matters that his canceled performance will happen during next year’s concert.