Storytelling is the Key to Understanding Our Past 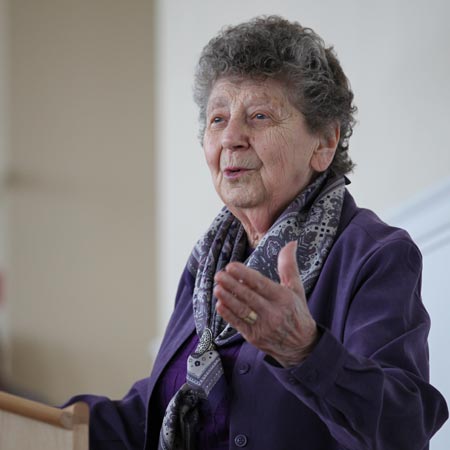 To better understand humanity and where we are today, young people should seek out the stories of older relatives and loved ones, Holocaust survivor Doris Edwards told students.

“If you have an older person in your family, ask them to share their life with you,” Ms. Edwards said in an assembly sponsored by the Jewish Student Union. “Once they are gone, those stories disappear.”

Born in southern Germany in 1929, Ms. Edwards witnessed the rise of the Nazi party as a young girl. While she was too young to understand the politics behind antisemitism, she experienced the incremental changes in attitudes when she began to be turned away by businesses in her town. She and her older brother were evacuated to the Netherlands through the Kindertransport rescue program, while her parents fled to the United States. Her grandmother, along with her aunt and cousins, died in concentration camps.

Ms. Edwards and her brother, through luck and family connections, managed to stay ahead of Nazi officials, first landing in Amsterdam and attempting to adapt to Dutch life. Their parents raised $800 to secure the children’s passage on a boat to New York City, but the trip involved a dangerous journey through Europe: Ms. Edwards recalled strict searches as they traveled by train back through Germany—where she and her brother had to stay for weeks—France, Spain and Portugal.

Upon arriving in New York, Ms. Edwards searched the waiting crowd for her parents, though it took almost an entire day to disembark. She recognizes her good fortune in escaping Europe to be reunited with her family after such a long time apart.

“It was the start of a new, wonderful life once we got off the boat in New York,” she said. “Don’t ever doubt that this is the greatest country in the world. You’re all very lucky to be here.”

A conversation with her son, when he was in his late 20s, prompted Ms. Edwards to begin sharing the story about her daring escape from Nazism. Ms. Edwards now shares her story through the Facing History and Ourselves nonprofit, an educational program that asks students to examine topics of racism, prejudice and antisemitism.