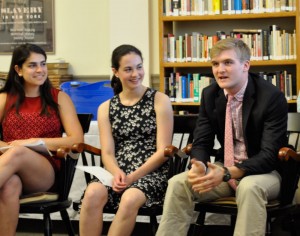 A spring tradition, students and faculty gathered over tea for the Bisbee Prize presentations on Thursday afternoon. The 11 winners, selected by their teachers for outstanding research on their U.S. History papers, gave brief introductions to their work and answered questions from faculty and their peers. Topics ranged from the Native American occupation of Alcatraz in 1969 to the eugenics movement in America in the early 20th century.

Sophie Clivio (II) researched the failure of Civil Rights movement leaders to address sexual assault or rape of women of color. “What I found most interesting is that within the Black Panther movement, very important and powerful black male leaders were assaulting black women who were the heart and soul of the movement. Their treatment was similar to how female slaves were treated, and it wasn’t until the feminist movement in the 1970s that sexual assault against black women was finally given attention.”

George Wilde (I) looked at how processed food products became an accepted part of daily American diet, leading to today’s high obesity rates. “The part of my research that was the most sobering was the mindset of people who worked in the food industry. They were basically bribing the U.S. government with cash and other favors. I learned money gets what it wants and that was pretty freaky to me.”

Winners of the 2017 Bisbee Prize are:

Sophie Clivio: Long Forgotten: The Sexual Rights of Women of Color in the Civil Rights Era

Rachel Handler: Criminally Black: Nixon and Reagan’s War on Drugs as a War on Black America

Patrick Huang: Criticisms of Franklin Roosevelt’s New Deal Programs and How They Contributed to an Increase in Federal Intervention

Alexandra Paul: Women’s Suffrage: A Danger to the Lives of Women!

Elina Thadhani: In Pursuit of Genetic Purity: The Acceleration of a Scientifically Rationalized Eugenics Movement in America

Henry Westerman: The Happy Warrior: Al Smith, Intolerance, and the Presidential
Election of 1928

George Wilde: Edible Empire: An Investigation into the Food industry’s Conquest of America

Jonathan WuWong: Savage Natives and Heathen Chinese: Education as a Weapon Against Culture in Terms of the Chinese Educational Mission and the Native American Boarding Schools