Students Earn State and National Honors in the Economics Challenge 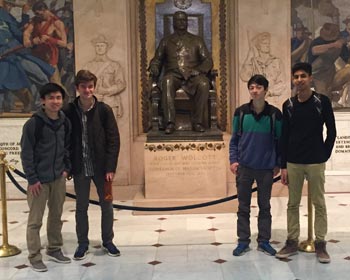 This spring, four students represented Milton for the first time in the National Economics Challenge, after winning their division in the statewide competition.

Class II students Jaime Moore-Carrillo, Dhruv Jain, Quincy Hughes and Jeffrey Cao were invited to the Massachusetts statehouse on May 15 to be recognized as state champions. The first Milton students to compete in the challenge, they also placed 16th out of 35 teams in the semi-finals of the David Ricardo Division in the national challenge. Their entry, held online in April, was the result of their independent research into forming a student economics club at Milton.

Questions in the competition focused on economic theory, micro- and macroeconomics, and current events. Only one member of the team has taken a formal economics course at Milton so far. Jaime, for example, grew up learning about economics from his parents. For Jaime, the subject is the perfect combination of math, history and social science. “I’m interested in the decisions people make, and the factors that play into why they make them,” says Jaime.

Math faculty members Michael Wood and Susan Karp, along with history faculty member Mark Heath, helped the students prepare for and enter the competition. The team developed a study guide and worked together to prepare for the broad range of topics.

“For us, some of the questions were common sense, but one of the biggest challenges was that even if we understood all of the concepts, we might not necessarily know the formal terms, which is an important component in the competition” Jeffrey says.

The study of economics “simplifies life,” says Quincy. “It’s an interesting study of how the world functions. It helps you understand and predict things that should happen under a certain set of circumstances.”