For Spring Break, Students Travel to Belize, the Czech Republic, and Mexico

March break is here, and many students are heading out on School-sponsored trips. Fifteen students will travel to Belize for the annual service trip organized by the Community Service Board. At Ocean Academy, on the island of Caye Caulker, they will work on school improvement projects and tutor children. 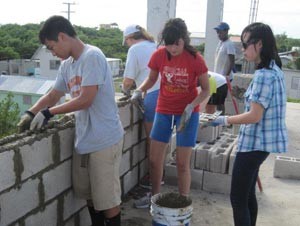 “I’m so glad I got the opportunity to go last year. We worked with kids, helped with construction, and even met fellow students our own age. The trip was a lot of work, but it was also a ton of fun,” says Cameron DiGiovanni (I).

The work is done in conjunction with Peacework, a nonprofit organization. This is Milton’s eleventh year working with the organization. While Peacework coordinates the work done on the island, students raise money leading up to the trip, through t-shirt and raffle sales.

The Chamber Orchestra and Chamber Singers trip is the largest spring break trip, with 66 students participating. The group will travel to Prague, the capital of the Czech Republic. The Orchestra will perform five concerts. One concert venue will be the Lobkowicz Palace, owned by a Milton Academy alumnus, who returned to the country in 2002 after the dissolution of the Communist government. This venue is where Ludwig van Beethoven first rehearsed his First Symphony; fittingly, the Chamber Orchestra will play that very piece in the same venue, almost two centuries later.

Chamber Singers will also perform five concerts throughout Prague. Although the Orchestra and Chamber Singers performances are usually held separately, this year will be slightly different. Six Orchestra members will accompany the Chamber Singers for several of their songs, one of which music faculty member Mr. Whalen wrote as part of his proposal to his wife.

“Appealing to both musical and political historians, Prague is a fitting venue for Milton’s classical musicians,” says Jam Smith (I). “I’m delighted to be performing with such talented peers and grateful to Milton for arranging the trip.”

Grace Stanfield (I), head of the Chamber Singers, has traveled with the group before: “I went on the Ireland trip two years ago and wasn’t sure what to expect,” she says, “but it was an amazing and beautiful trip. I don’t know what to expect from Prague, but I know the tour will be a unique experience.”

Visit the concert tour blog for updates on the trip.

FInally, eight ambitious students will embark on the Outdoor Program (ODP) trip to Baja California, Mexico, where they will sea kayak from beach to beach. To maximize their time outdoors, they will camp on the beaches at night. When they’re not paddling they will be hiking, snorkeling, and exploring the beaches and hills. Previous spring break ODP trips have been to Joshua Tree National Park and Red Rock Canyon, and Bryce and Zion.

“I really enjoyed last year’s spring break trip,” says Malcolm McCann (II). “It was really something to look forward to. I’m so happy Milton offers such a cool trip each year, and I’m sure this year’s ODP trip will be incredible.”

A version of this story originally ran in the student newspaper, the Milton Measure.