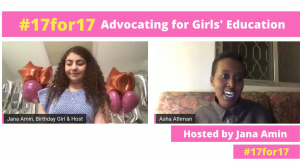 As a freshman, Jana Amin ’21 traveled on a Milton class trip to Jordan, where the students visited the Collateral Repair Project (CRP), a non-governmental organization that works with refugees on community-building, education, and trauma relief. She was so moved by their mission that she became an “e-learning partner” starting her sophomore year, video-chatting with students to help them learn conversational English. Her first two students were a Yemeni mother of five children and a Sudanese man.

Amin then became an English teacher for a class of 12 CRP students and she has encouraged other Milton students—especially after school switched to remote learning—to volunteer as virtual tutors and to help her with developing an English-language curriculum to use in the classes.

Olivia Wang ’20 became involved with CRP the summer before her junior year. She founded a service organization called Eunoia, which, similar to CRP, aims to virtually connect high school volunteers to refugees in the Middle East. After she pitched Eunoia to her History of the Middle East teacher, she learned about CRP.

“After tutoring three different students for CRP, I can say that the program is an incredibly challenging and rewarding activity,” said Wang. “My first student, Sandra, was a few years older than me. Because our sessions weren’t structured, they felt super casual and conversational. I learned about the struggles she encounters as a woman in Jordan, about her story of leaving Iraq during war and conflict, and about her dreams to settle in an English-speaking country. After just a few months, our sessions discontinued abruptly and I learned that her Visa got approved and she had moved to Australia! Her story inspires me to continue helping CRP students practice their English. It is an effortless job on the volunteers’ part, but it means a lot to the refugees who otherwise couldn’t get the practice they seek.”

Amin also became involved with CRP’s SuperGirls program, where girl refugees would meet together twice a week, before Jordan went into a lockdown.

“I’m super passionate about girls’ education, and I wanted to help with visibility for this small program,” said Amin. To celebrate her 17th birthday earlier this summer, Amin hosted a virtual event called #17for17: Advocating for Girls’ Education. The live streamed event brought together 17 speakers, including the CEO of the Malala Fund, who represented over 15 countries to discuss the importance of girls’ education.

“I had Asha Athman, CRP’s women and community programs officer, help me close the event and I raised over $2,200 for the SuperGirls program throughout the day,” said Amin.