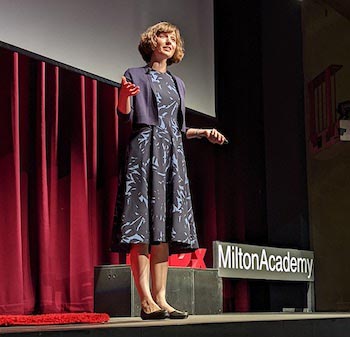 The inaugural TEDxMiltonAcademy event filled King Theatre with ideas about belonging, health, climate, identity, and psychology, as six speakers from the Milton community shared carefully crafted and passionate talks on subjects of their choosing.

Milton junior Benjamin Siegel ’24 had the idea to bring TEDx to Milton after attending a TEDx conference years ago. Siegel, along with Bea Becker ’25, Grace Grady ’23, and Alexa Burton ’24, organized the event, licensing it through TEDx and soliciting applications from potential student, alumni, and faculty speakers. Together, they narrowed the speakers to six.

“Tonight is about community,” said Siegel as he introduced the event. “We were inspired to put on this event to shine a light on all the talent, creativity, and knowledge in the Milton community. Milton is full of people with diverse backgrounds and inspirational stories, some of which we bring to the stage for you tonight.”

The school’s Alumni and Development and Student Activities offices supported the student organizers with funding. A TEDx event provides a platform for ideas within a local community as well as the opportunity to share them more broadly, Siegel said.

TEDxMiltonAcademy featured talks from three alumni: Cecilia Guan ’18, who discussed the psychology of a “beginner’s mind”; Michael Kennedy ’01, who shared ideas for involving low-income stakeholders in clean-energy solutions; and Katherine Walker ’02, who spoke about finding humanity as a physician in a pandemic-stricken intensive care unit. Two students, Nika Farokhzad ’23 and Scarlett Eldaief ’24, spoke about the need for comprehensive, national sex eduation and about the complexities of Middle Eastern/North African identity issues, respectively. English Department faculty member Kristine Palmero shared her story of donating bone marrow and the connection she forged with the recipient.

Early in the COVID-19 pandemic, doctors had to work even harder to honor the humanity of their patients, many of whom were hooked up to life-saving machines and who were isolated because hospitals prohibited visitors, said Walker, a pulmonary and critical-care doctor at Brigham & Women’s Hospital. She described holding phones so families could say goodbye to dying patients—still, there were moments of profound hope.

TED (which stands for technology, entertainment, and design) is a free media organization that shares “ideas worth spreading” via short videos of speeches from subject-matter experts. TEDx talks are licensed through the organization and can be hosted by any group. Milton’s talks will be shared through the TEDx YouTube channel.