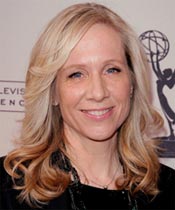 This year’s commencement speaker is television and film producer Betsy Beers, Milton Class of 1975. Betsy is best known for her work on Grey’s Anatomy and Scandal. Beginning her career as an actor, Betsy migrated toward improvisation and sketch comedy. She found her calling in producing. From her debut in 1993, she worked mostly in film; her credits include 200 Cigarettes (1999), Casanova (2005) and The Hoax (2007). Betsy and long-term collaborative partner Shonda Rhimes developed the hit show Grey’s Anatomy, now in its ninth season, and continued with the spinoff Private Practice. She has served as executive producer for both series. She is co-producer ofScandal. Betsy has been nominated twice by the Producers Guild of America for their Television Producer of the Year Award and has won it once. She studied film and literature at Williams College.

Hear Betsy talk about her path to television production in this Mini Masterclass.

The tradition of inviting Milton graduates to speak at commencement began in 2004. In the fall of their Class I year, student committee volunteers partner with class deans and the alumni office on choosing the year’s speaker. After developing a list of qualities and characteristics important to them, students narrow a pool of potential candidates, reading bios of the alumni and watching video clips of their public presentations. Students present their final choices to Head of School Todd Bland, who invites the speaker to campus in this special role.