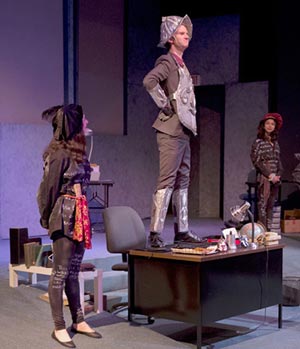 Don Quixote, as it will play out in King Theatre this weekend, is new to Milton and to the world—but possibly not to Cervantes. Shane Fuller (performing arts) directed this Don Quixote spin off, called Donnie Q, when he was teaching theater for college students and co-managed a summer program called Square Top Repertory Theatre, in Pagosa Springs, Colorado.

“It looks at the novel with fresh eyes,” says Mr. Fuller, “and offers a contemporary take on the felt need to be a hero.” Set in contemporary office space with “The Office” overtones, our erstwhile hero, Donnie, figures that he’d rather be a knight than keep on slogging in the office.

Mr. Fuller has been eager to rethink and rework the Square Top production, and beginning last summer he worked on reviewing the script and the story components and adapting the show. The story begins to spin out when the office crew learns that a certain report must be finished before they all go home, and they’ll likely be working at it all night. They’re stuck. At a particular moment during the evening, a cacophony of relentless office sounds — staplers, printers, keyboards — triggers Donnie, who snaps and runs out. When he ultimately returns, he’s wearing homemade armor and feels compelled to take on some “quests,” confusing and frustrating to his co-workers, especially when one quest results in a broken server. Ultimately the crew realizes that they will need to get involved in a quest in order to trap Donnie. They cooperate in a mission to kill an office “giant,” (a giant whose body is enshrouded with monitor shells and has keyboards for arms) but Donnie surprises them by drawing a real sword. They then realize that a bona fide “capture” of Donnie will be necessary and they make that happen.

Mr. Fuller recalls that in some productions of Don Quixote, the figure of Cervantes appears; Cervantes explains that he is merely the stepfather of a tale that originated in an earlier manuscript. So today’s production is yet another rendition of the story, with another stepfather as it were, and Cervantes appears in the Milton production to explain and facilitate the latter day consideration of the Don Quixote and his challenges. Magicians—who figure in the original character Don Quixote’s explanation of why things are going down the way they are—also help Cervantes create different worlds in the Milton production.

The play is a comedy, of course, but “not without its moving moments,” says Mr. Fuller. For instance Sancho Panchez (played by a young, gullible intern in the office who’s eager to do what her boss wants) asks Donnie “why he believes what he reads in books.” Donnie responds, explaining the living world he’s been able to create as a result of his reading. Cervantes enables a “happy ending,” with the report complete, and Donnie assuming that he had a key role in that outcome.

The cast for Milton’s 2016 Don Quixote involves 14 actors; Chris Wilbur (II) is Donnie. “The play involves plenty of sword fights and battles,” Mr. Fuller says. “It will rely on lots of special effects. Nick Mehlman (I) is creating a special sound track. The play also requires intricate use of lights, projections and fog.” In short, Donnie Q seems bound to be a comedy extravaganza, taking place on Thursday through Saturday evenings, May 19, 20 and 21. Thursday and Friday shows begin at 7:30 p.m. and curtains go up at 7 p.m. on Saturday. Tickets can be purchased in Forbes Dining Hall during lunch periods this week or online at https://miltontickets.tixato.com/buy.

View photos from the performance.