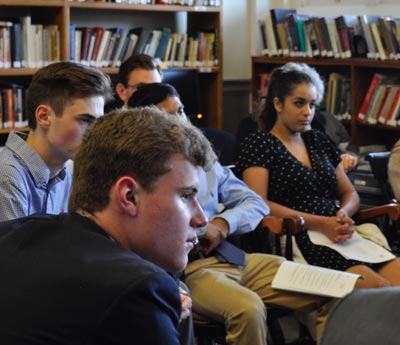 Sharing research on topics ranging from the impact of transcendentalism on both the abolition and women’s rights movements to the Iran-Contra affair in the 1980s, 13 student winners of the Bisbee Prize gathered for a discussion and celebration with history department faculty. The students were selected by their teachers for outstanding research on their United States History papers.

Molly Chiang (I) set out to research code-breakers during World War II, and spoke with history faculty member Steven Bachelor, who suggested she read about William F. Friedman. From there, she learned about Friedman’s wife, Elizebeth S. Friedman, who is commonly known as the nation’s first female cryptographer. “When she was training people, she had some resistance from younger men,” Molly said. “She often downplayed her own abilities and presented herself as a teacher in order to reach people.”

Catherine Gallori (I) studied education pioneer Horace Mann and the many factors leading to the foundation of public schools during the Industrial Revolution. Among those factors were fears about the waves of new immigrants to the U.S. “People were scared of losing what they considered their national identity as all these new cultures were coming in,” Catherine said. “They looked to the schools as a way to create an American culture and value systems that would homogenize the population.”

Coalter Palmer (I) said he was struck by how discriminatory housing practices and redlining before and after the Fair Housing Act of 1968 continue to impact neighborhoods today, in terms of racial segregation and unequal access to necessary services. “It really hits close to home in Boston,” he said. “Housing is a fundamental need. If none of the residents in a community have access to securing a loan and getting a home, then how can that community thrive?”

Winners of the 2018 Bisbee Prize are:

John Albright (II)
Timelessly Rational: Transcendentalism as a Vehicle for Social Reform in the Antebellum Era

Erin Brady (II)
Upward Mobility Through Prostitution: The Rise of Women’s Rights in the West

Rishi Dhir (II)
The Realignment of the Democratic Party: William Jennings Bryan and the Election of 1896

Aditya Gandhi (I)
The Nativist Hatred of South Asian Immigrants

Kiely Johnson (II)
The Irish in America: How They Cast off a Negative Stereotype to Become White

Navpreet Sekhon (I)
Clickbait in 1968: How the Media Failed Feminism

Yue Yang (I)
Intent vs. Impact: the U.S.’s Motivation Behind Supporting the Kuo-ming-tan Regime’s Reigh in Taiwan During the Early Years of the Cold War