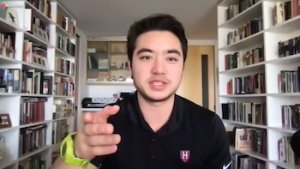 Before his first meet as an NCAA athlete in 2015, Schuyler Bailar led the Harvard men’s swim team into the natatorium. He was nervous for a number of reasons, he told the Milton community Wednesday.

Bailar was about to be the first openly transgender athlete to compete on a men’s NCAA Division I team—his family and friends were in the stands along with members of the press; the lifelong champion swimmer had never competed as a man before, and he was coming off a nearly two-year break.

“They introduce you in alphabetical order, and my last name beginning with ‘B’ meant that I was first, which also meant that I was all alone out there,” he said. “Everybody had said I couldn’t do it—there was no way a trans guy like me could keep up with, much less beat, other men—so I felt like I had a lot to prove and I was very afraid that I couldn’t prove it. Everything was so new and different”

In a virtual visit coordinated by the Office of Multiculturalism and Community Development, Bailar spoke with students, faculty, staff, and families in the afternoon, followed by breakout Q&A sessions with Milton employees, the Asian Society and the student group GASP (Gender and Sexuality Perspectives), families, and an affinity group for trans and nonbinary students and employees.

Describing that first meet in men’s competition, Bailar remembered, once his team joined him at the edge of the pool, his doubts began to fade. Throughout his Harvard career, he exceeded expectations and was part of one of the Crimson’s winningest teams in decades, picking up three Ivy League Championship rings.

“This is the same thing I’ve been doing my whole entire life… but for the first time in my life, I was competing as just me,” he said. “There wasn’t all this baggage of who I thought I had to be, or whoever everyone else told me I was. I was just me, and that’s why I share my story: To prove that you can be exactly who you are, whatever that means to you… Your identity doesn’t have to hold you back from your passions.”

Bailar, who was assigned female at birth, began swimming at age 1 and competing by the time he was 4. By the time he turned 15, he was a nationally ranked swimmer and a high-achieving student, but living through bullying, gender dysphoria, self-harm, and mental health challenges were making him miserable. Initially recruited for the Harvard women’s swim team, Bailar entered a residential treatment facility for disordered eating after high school, where he came out as transgender for the first time. The coaches of Harvard’s women’s and men’s programs gave him a choice of teams and his teammates were welcoming and excited, even though “nobody had any idea what we were doing,” he joked.

Young transgender athletes, particularly trans girls, have been the targets of discriminatory practices and laws, including several bills currently before state legislatures, Bailar said, although a person’s birth sex does not determine their athletic ability. Additionally, Arkansas passed a law this month barring transgender children from gender-affirming medical care, a law many LGBTQ+ advocates have criticized as dangerous and potentially deadly.

There were some people in Bailar’s life who didn’t support him when he came out, but finally living and being confident in his identity helped him set healthy boundaries. The ways trans and nonbinary people transition or express their identities vary broadly, he explained. Another person’s ability to “get it” doesn’t invalidate anyone’s identity.

“I encourage all of us to take that into account,” he said. “We need to trust other people to know themselves best, to trust them to know their identities, and then support them regardless of whether we understand.”