We the People in Nesto Gallery 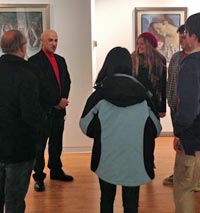 Humanist painter, Chawky Frenn, met with students and faculty during an opening reception of his exhibit, We the People, in Milton’s Nesto Gallery. The opening words of the Constitution of the United States have inspired Chawky’s visual reflections on the history, principles, visions, costs and challenges confronting our democratic ideals and values. Powerful images drawn and painted directly onto parchment reproductions of that sacred document are paired with quotes from U.S. presidents, lawmakers, justices, historians, journalists, writers, scientists, artists, economists and peace activists. Quotes are also drawn from those who transcend their tribal, religious, racial, national and gender barriers to become universal voices for peace and human rights.

Read about the Nesto show in the latest issue ofArtScope magazine.

Chawky Frenn exhibits nationally and internationally, and he has received positive reviews and critical acclaim by newspapers and magazines including the New York Times, NY ARTS,Art New England, Washington Post, Boston Globe, Connecticut Post, and Pittsburgh Post-Gazette. He is the author of two new books, 100 Boston Painters and 100 Boston Artists, and teaches at George Mason University in Fairfax, Virginia.

We the People runs through April 25. The Nesto Gallery is located on the lower level of the Art and Media Center and is open to the public weekdays 8:30 a.m. to 3:30 p.m.