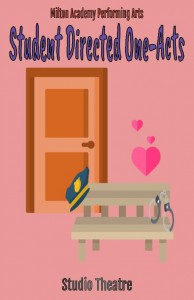 The student one-act plays are a venue for student directors and actors to showcase their wide-ranging talents on and off stage. This year there are three one-acts, completely directed, performed, and tech-supported by students.

Eloise said the play is centered on the character Sheldon Grimes. “He is the pinnacle of goodness, but he finds himself in serious trouble with the law, his crime being this very virtue of kindness. Sheldon must work to rectify his behavior, with help from two cops and a ‘professional.’”

Eloise said that the dystopian society reflected in the play, which is written by Jonathan Rand, “not only lends itself to hilarity but presents underlying commentary on corruption within today’s justice system plagued with profiling. It begs the audience to ponder what truly is good—the law or what you personally believe to be right. We chose this play because of this nuance and, of course, because it made us laugh really hard. We hope everyone enjoys it!”

The other two plays are “Why We Like Love Stories” directed by Rowan Hack ’20 and “The Door,” directed by Miranda Paiz ’21.

The One Acts begin tonight, February 20, in the Studio Theatre at the Kellner Performing Arts Center. They will run Friday, February 21 at 7:30 p.m. and Saturday, February 22 at 7 p.m.