Work Toward Justice in Every Field, Young Alumni Urge Students 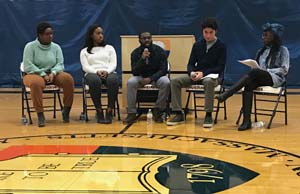 You can find humanity and make social progress along any career or academic path, Milton alumna Jovonna Jones ’11 told students. “If justice and equity aren’t part of your life, you should examine that. That’s a problem.”

Jovonna is a doctoral student in African and African American studies at Harvard, where she researches critical race theory, American art history, performance studies and cultural practice. She joined fellow alumni Osaremen Okolo ’13 and Kevin Collins ’10 in a discussion about race and service sponsored by Community Engagement Programs and Partnerships and the student club Onyx.

People who want to become active in social justice causes should evaluate their own passions and listen carefully to the people affected by injustice, Jovonna said. During a semester-long break in Atlanta, Jovonna became active in community organizing—there, she encountered urban development systems and regulations rife with racial bias. She recounted a story about a county commissioner who proudly announced his intentions to design downtown Atlanta for the “type of people” he wanted to see living there, with no regard for the existing residents.

“I had a lot to learn. It wasn’t my place to speak or to try to lead. I had to listen to what was being said and was not being said,” she explained. “You have to give yourself time for that.”

Osaremen is a pre-med student at Harvard, where she cofounded the Politics of Race and Ethnicity, a Harvard University Institute of Politics program. She is currently writing her undergraduate thesis on the stereotypes of hyper-sexuality and hyper-fertility of black women, and how such perception impacts black women’s access to the latest in reproductive medicine. Osaremen’s journey began before she was born—as her parents traveled to the United States from Nigeria to seek fertility treatment—and she plans to continue studying health policy after graduating.

“Health policy is an area that is really intriguing,” she said, noting that she was often the only woman of color in the room when she first began focusing her interests. “It could really benefit from the perspective of multicultural people of color. Here at Milton, the faculty pushed us to think critically and seek diverse perspectives in all of our fields of study.”

Kevin became interested in community service while he attended Milton, and remained active at Georgetown, where he felt called to serve after graduation. He enrolled in Teach for America, a program that places young college graduates in underserved schools. Kevin, a Brooklyn native and the son of immigrants from Grenada, became a high-school geometry teacher in New Orleans. Stepping outside of the “bubble” of support at Milton and Georgetown to lead overcrowded classrooms was a challenge at first.

“The kids there were used to teachers not staying, they were not used to having consistent teaching styles and consistent support in their lives,” he said. “We have a lot of access and opportunity here at Milton. Don’t take it for granted.”