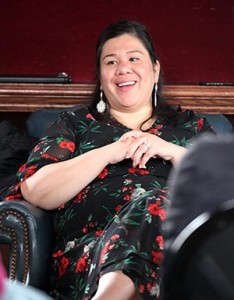 Ms. Ramírez became an activist at 14 in her hometown in rural Ohio, when she noticed that her local newspaper, which welcomed home returning seasonal fishermen, did not acknowledge returning farm workers. Her Mexican American grandparents and parents had been migrant farm workers. When Ms. Ramírez challenged the editors about the oversight, they gave her a column, and she set out to tell the stories of local migrant workers and other marginalized people.

There are about 700,000 women farm workers in America “who pick, pack and plant the food that we eat,” Ms. Ramírez said. They earn about $11,000 a year, move around according to crop schedules and often work alongside male family members, who collect the women’s paychecks.

Farm workers have long been subject to labor abuses, some historically sanctioned by federal law, spurring César Chávez and Dolores Huerta to form United Farm Workers of America (UFW) in the 1960s. Ms. Huerta has served as a mentor to Ms. Ramírez, who is the founder of what is now Esperanza: The Immigrant Women’s Legal Initiative of the Southern Poverty Law Center. Ms. Ramírez is also a co-founder of Alianza Nacional de Campesinas (the National Farmworker Women’s Alliance), and the former director of LatinasRepresent, the only national, non-partisan initiative to help Latinas secure public leadership positions.

Sexual harassment of female farm workers remains rampant, Ms. Ramírez said. She created the first legal movement in the U.S. focused on representing farmworker women in legal cases involving sexual harassment and other forms of gender discrimination. She has dedicated her life to ending gender-based violence and unjust treatment in the workplace, along with achieving gender justice, especially for the most marginalized women, including farm workers, Latinas, and immigrants. A letter she wrote in late 2017 on behalf of Alianza expressed female farm workers’ support for women publicly responding to sexual harassment in the entertainment industry. The letter, which ran in TIME Magazine, in part sparked the Time’s Up movement, which insists on safe, fair and dignified work for women of all kinds and in all work environments.

The Margaret A. Johnson Lecture series was endowed in 1981 by an alumna of the Milton Academy Girls’ School to mark the retirement of its principal. This lecture series brings to campus women distinguished by their professional achievement, a group that has included elected leaders, national and international journalists, heads of broadcast and print media, authors, actresses, filmmakers, economists, and business leaders.