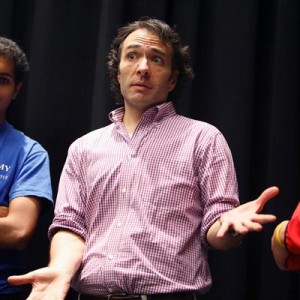 Tapping into performing arts department chair Peter Parisi’s passion for teaching and his love for Milton is not hard. After 20 years of teaching drama, speech, improv and oral interpretation classes, his enthusiasm has not waned. It bubbles to the surface when he talks about his numerous roles and experiences.

“Milton has been awesome,” says Peter. “I worked in admission for many years when faculty also served as admission staff. You get to meet these wonderful kids and families. The kids think they know themselves so well as 13- and 14-year-olds. As the admission person you say to yourself, ‘Yes, you do know yourself, but I also know you are going to make these discoveries about yourself when you come here and it’s going to be amazing.’”

As a new education and theater graduate, Peter came to Milton to work on his teaching certification as a sabbatical replacement. He then attended University of Texas, Austin where he earned his master’s in children’s dramatic literature, creative drama and speech before he returned to Milton full time.

“One thing I learned at Milton early on is that I don’t have to know everything. That can be scary for young teachers. You think you have to know it all and that you can never let them see you sweat. I learned at Milton that this is false because it is not my authentic self. I can make mistakes and admit I don’t know something. And the way we use knowledge today has changed because of technology. Rather than one expert in the room; you have a room of experts with their expertise in a device, so we have to collaborate in different ways.”

As a new teacher at Milton, Peter moved into Faulkner House, a small boys’ dorm. When Faulkner became the Health Center, Peter moved over to Norris House, where he still lives.

“It’s probably one of the best parts of my job. The kids need to come home to a place where there is an adult who really cares about them. I mean, they have adults who care about them all day long, and they have parents, friends and coaches that care about them tremendously. But it is also important to have someone who cares about them in the dorm, who is interested in their lives and who respects them. It’s an extension of work you do in the classroom. We get to see each other in different light.”

During his tenure, Peter has directed roughly 45-50 productions—musicals, comedies, one-acts, dramas and the beloved 1212 plays.

“One of my first 1212s, The Shadowbox was one of my favorites. Also Hedda Gabler, Medea, and Hecuba. They’re all heavy duty and I think people don’t think of me as heavy duty. They see me as the director of Spamalot and Avenue Q. But I love the dark shows that hit you in the sinuses and you feel it in your face.”

Peter’s favorite class to teach is Improv, a popular class for seniors. He sometimes goes to The Second City in Chicago for more training and brings what he learns into the Improv theater, also known as the “Black Box.”

“I like to spend my professional development time becoming a better teacher so I do things that are a tiny bit scary, just to put myself in the position of my students. We are always learning.  I always say to the kids, especially in Improv, that you learn as much from your bombs as from your successes. I don’t ask them to something I wouldn’t do myself. I always demonstrate and I often demonstrate failure, not intentionally, but because it happens. I want them to see ‘I blew it, here’s how, did you guys see that?’ I want them to see that I’m not going to shut down and never perform again because of a mistake.

“I often tell families on return visits that what I like about the student-teacher relationship is that it’s grounded in respect. It’s not a one-way street where they simply respect the teacher. I also respect them. It has to be that way. They are so smart so I set the bar high. They’ll meet my expectations and then exceed them, which causes me to raise my game. This is good because it keeps me on my toes!”