Since 1974, Milton’s jazz program—founded and directed by music faculty member, Bob Sinicrope—has grown to include over 75 students involved in the study and performance of jazz in eight different jazz groups all of which meet during the school day. Downbeat magazine has twice named Milton’s Jazz Combo the best high school jazz group in the country. In the classroom, students take advantage of five different levels of jazz improvisation courses, expanding their own capabilities as they learn about the genre.

Performing throughout the year on and off campus, Milton’s jazz combos have opened for such artists as Jim Hall, Dave Holland, Abdullah Ibrahim, Elvin Jones, T.S. Monk, Poncho Sanchez, James Taylor, and Victor Wooten. Over the past several years, advanced jazz students have toured South Africa 12 times, where Milton has a close relationship with two township groups—the Amy Foundation and the Music Academy of Gauteng. Students also visit and play at other South African schools and venues. On these tours, students have delivered over $265,000 worth of donated music instruments and materials to needy South African school music programs.

The group has played extensively in Europe, Canada, and 15 states across America. The jazz combo played at the White House on two separate occasions and at former Massachusetts Governor Deval Patrick’s inauguration celebration. The group performed for Archbishop Desmond Tutu and appeared four times on the NPR radio show, “Says You.” Milton’s musicians have also made numerous appearances at jazz education conferences in Atlanta, Anaheim, Boston, Dallas, Louisville, New Orleans, New York, St. Louis, and Washington. The jazz music program offers all students the opportunity to learn about and perform jazz from an international perspective.

In 2007, Bob Sinicrope became the inaugural recipient of the John LaPorta Jazz Educator of the Year award. In 2010, he received both a Downbeat magazine Jazz Education Achievement award and an award from the National Youth Development Council for his service with youth. In 2014, Bob became the president of the Jazz Education Network. In 2020, Bob released the first in a series of many online SmartMusic jazz improvisation books entitled “Pathways Towards Greatness.”

Jazz Students in the Classroom 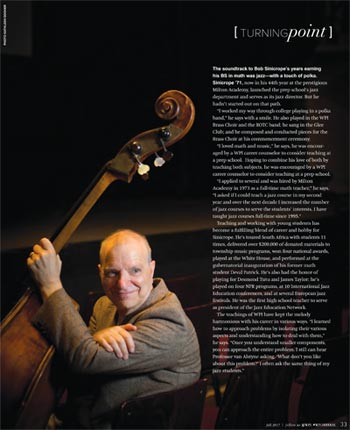